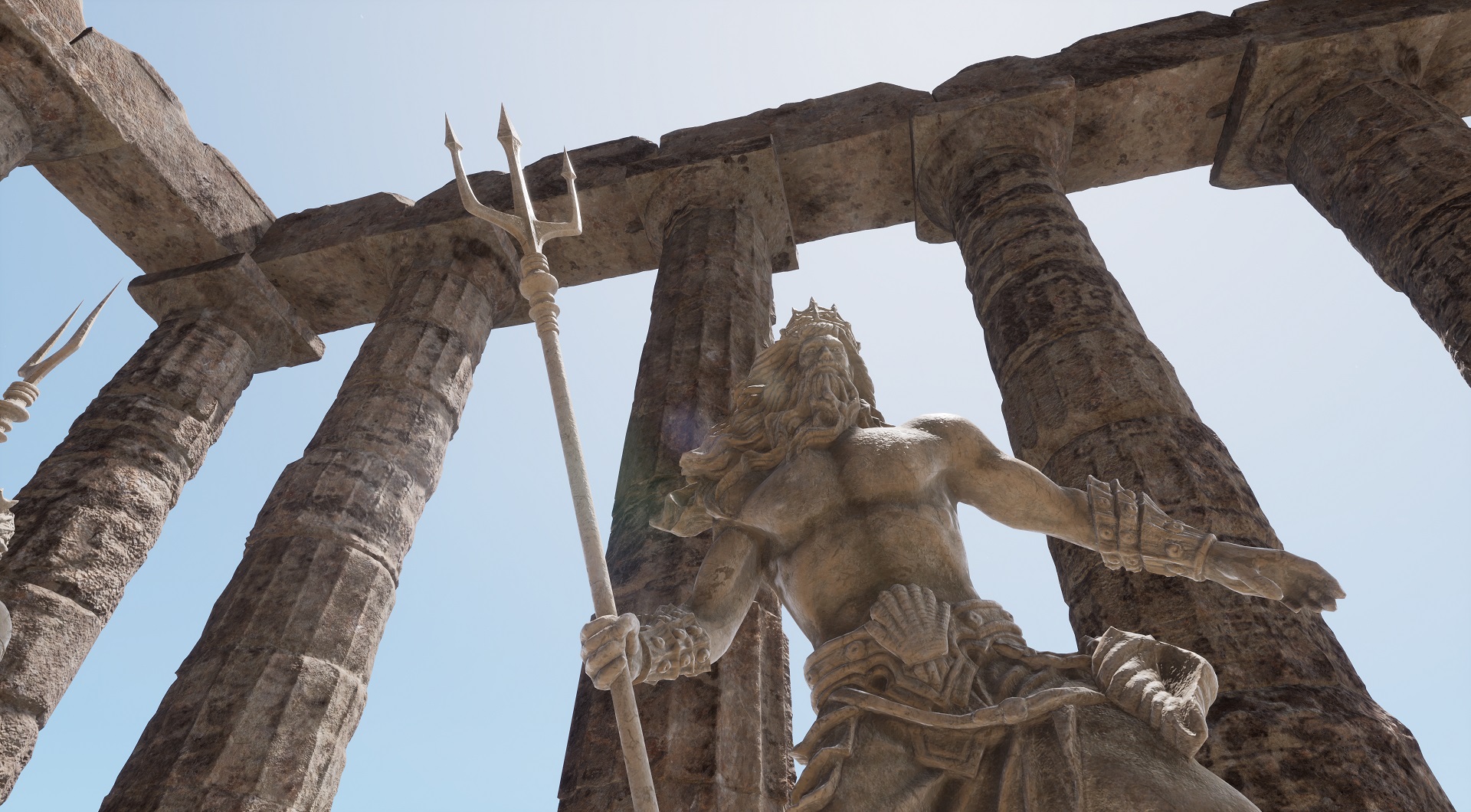 In this blog we’ll discuss our creative process behind the second ZenART VR location, Olympus: Home of the Gods.

Like all beginnings, taking on the Belogradchik Rocks was a difficult task. The team was brand new, smaller at the time, and we had to experiment with and test out practically every part of our development cycle. It took time, patience, and tons of work, but the end result was very rewarding.

Armed with more experience, knowledge, and our trusty gear, it was time to tackle a new peak. Some might say it was the peak – mighty Olympus, home of the ancient Greek gods. Was it going to be smooth sailing or Heraclean labor?

That’s why we settled on Olympus – not the real-life mountain top, but rather the mythological palace of the gods. That way we could do something really cool and grandiose, tell an exciting story, teleport the player to a location that they could never see in real life, and still keep our ultra-realistic graphics, basing it on actual locations from the appropriate place and time. A match made in heaven, literally.

We did some location scouting, refined the initial concept, and created a design doc featuring level design, gameplay loop, and some dialogue. We were ready to begin development!

While most of us remained in Sofia, a small team flew to Greece with backpacks full of gear. The guys visited and shot two ancient Greek sites – a Temple of Aphaia and a Temple of Poseidon. The two are amazing representations of the rich ancient Greek culture and provide a mix of preserved and ruined elements, which was exactly what we’re after. The mission continued across multiple mountains where we collected some breath-taking vistas, textures and geographical oddities that we could work off of to create a believable and amazing-looking mountain top to serve as the fundament for our godly temple-palace.

Meanwhile, our writers immersed themselves in the world of Ancient Greece and poured over the pages of history and myth. While working on the script for the location, we faced numerous artistic challenges.

On one hand, Greek myth is very well-known and pretty much everybody has a certain understanding of its gods and heroes. On the other, Olympus is also present in modern pop culture with media spanning from Disney’s Hercules to Assassin’s Creed Odyssey covering the subject. That meant that we had to pick elements that would be recognizable to our players, but also highlight lesser-known aspects of the mythology and provide some quality educational elements on top of the entertainment value.

That’s why we gave a lot of thought to the characters and the story we wanted to tell. The research was tough but satisfying. We would oftentimes encounter multiple conflicting retellings of the same myths. In these cases, we opted to go for the most reliable historical sources and separate ourselves from the most popular versions, as some of them don’t really have a literary backing. For example, Hades is often depicted wielding a bident (a two-pronged pitchfork, basically a trident missing its middle point), but his signature symbol is actually an invisibility helmet. In this particular case we included both, but put an accent only on the helmet to highlight its significance for the God of the dead.

When the 3D artists were back and the writers had prepared the script, the two teams joined forces and merged for the rest of the workflow.

This being our second location, we wanted to offer more interactive features and cool gameplay elements that wouldn’t thematically fit in the Tales of the Rocks. If you’re in the Home of the Gods, why not give you a taste of their divine powers? If you learn the secrets of Olympus and prove your worth, Zeus, king of the gods, will reward you with his divine lightning. As an owner of brittle Greek pottery, he should know better.

Speaking of gods, Olympus: Home of the Gods will also feature a Guide character for the first time. While Tales of the Rocks provided some impressive voiceovers telling the history and legends of the place, Olympus will have an actual host that moves with the player and shares details of the place. We had lots of fun programming this special character and giving him tons of personality through his corky lines.

As of the writing of this blog post, we are in the final stages of development and the third ZenART VR location is already in preproduction. We are happy with the way things are shaping up and we can’t wait to show you more!

Stay tuned to this blog and keep an eye on our social media pages, where we’ll continue to provide updates on our progress. See you soon!

2019Olympus: Home of the Godsupdate
Related Articles
We’re a finalist at the Fourth International VR Awards!
Zen Universe is on sale!
Thanks for the feedback! (Progress update)
Developer Diary – May 2020
ZenART VR is an Epic MegaGrants Recipient
The new SteamVR look is dope
Chic Myths About Greek Myths
©2020 ZENART ENTERTAINMENT, INC. ALL RIGHTS RESERVED.
All trademarks referenced herein are the properties of their respective owners.